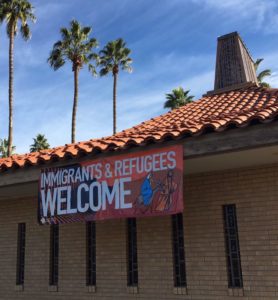 Community is about drawing circles.  We draw circles of love to embrace all that we find good and holy and right. The problem with most circles is that they are too small.  When we speak of a circle of friends, we usually mean a group of people who think and talk and act like us.  More often than not, these friends live in the same kinds of houses and drive the same kinds of cars and eat the same kinds of breakfast cereals that we do.  People who have different colored skin and foreign accents, four-legged creatures, plants and the earth are often left outside the circle of our concern.  That’s why the cross is so important.  Under ordinary circumstances, Matthew the tax collector and Simon the Zealot wouldn’t have been caught dead together.  But there they were, disciples of Jesus. James and John, hot tempered and impulsive, were in that group, along with Thomas, who was given to intellectual curiosity and cautious deliberation.  Martha, the organizer and doer, was there, along with reflecting and studious Mary.  Jesus has always attracted people who are as diverse as can be. Where the movement of the circle is centripetal (in upon itself), the movement of the cross is centrifugal (reaching out).  The cross is not just a symbol of “personal salvation,” the cross is a reminder that gave us Jesus because “God so loved the world (cosmos)” (John 3:16).

He drew a circle to shut me out
Heretic, rebel, a thing to flout,

But love and I had the wit to win
We drew a circle that took him in.

In the light of God’s love—shown to us in the life, death and resurrection of Christ—we are called to draw bigger circles.  Circles that include.

That’s why we say, “Community is more than our name.  It’s our mission.”